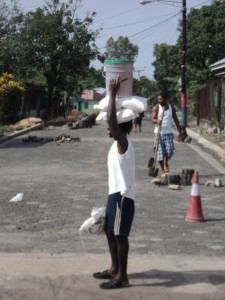 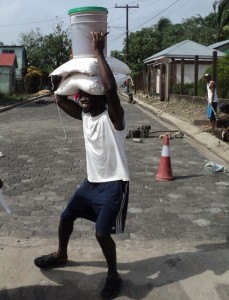 A local Chambaman called Dellan, carries two 25 lb. sacks of rice and flour and a gallon of oil on his head. Note: He is drunk!

I’ll do a blog post about some of the words that are used here but this post is about paid help but not paid help in the traditional sense. The word “Chamba” means help but more like a paid handout. If you need something carried from the dock or a shop to your home, this would be considered Chamba. If you want your yard chopped (no one uses a lawnmower here instead they cut the grass with a machete) or a hole dug or just about anything, this would be considered Chamba.

There is a group of people here that are referred to as Chamba men/women. This section of the population are people who do odd jobs on a daily basis for pay.  What makes this group interesting is that the majority of them are either alcoholics or drug-users. They will do whatever type of work to feed their addictions but don’t think this means you can take advantage of them.  They haggle with you over the price of the work and often time I’m surprised at how expensive their labor can be.

What I also find surprising is what they can do while drunk or high.  They display great feats of strength, coordination and amazingly work ethics. They take great pride in their work and carefully build their reputations as chamba men/women so that when work is available, they will be sought out. And this works really well here in Pearl Lagoon.  I know there are two or three Chambamen that my husband Jose uses consistently because he likes that they work quickly and neatly. He doesn’t mind haggling with them over the price and unlike some, believes that if a man works, he should be paid like a man, regardless of what he intends to do with his money.

The chambawomen are not as visible here but they do exist. You don’t see them on the wharf or hanging out in front of Miss Isabel’s shop as you would see the men but you can find them just by asking for them. They are often used to wash clothes, general house cleaning, and sometimes even cooking.

The sad part of this is that while they will work, and hard oftentimes, the money they earn usually does not go into helping to support their families. Rather, the money is spent on their addiction.

As a newcomer here, I ask “Why use Chamba men/women if you know what they will do the money?”  “Why not hire someone who doesn’t use drugs or alcohol and who could use the money for their family?”  Jose explains that most men are too proud to do the work that Chambamen do for the amount of money it would net them.

So it seems the Chamba people have a corner on this part of the labor market. And they also occupy a significant corner in the community…just opposite the wharf in front of Miss Isabel’s shop where they can buy their drink of choice.