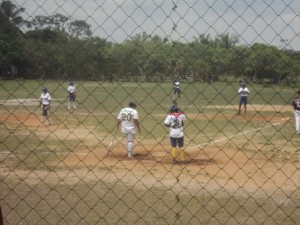 This past weekend I had the honour of taking in a Ladies Softball Tournament in Haulover, Nicaragua.  There were teams from the nearby communities including Brown Bank, Little Island, Kakabila, Kukra Hill, Raitipura, Pueblo Nuevo, Sandy Bay, Set Net, Haulover, Pearl Lagoon, Orinoco, and Marshall Point.

Many of the teams were a ragtag group of women ranging in age from teenaged girls to 40-something-year-old women.  Some had full uniforms with the team and sponsor names and colours proudly displayed on their hats and shirts while others you could barely tell who team members were for their lack of uniforms. Other than a great deal of team pride, the other thing most of the women had in common, when they took their positions on the field, was that they weren’t wearing shoes—and in fact most played in sock feet.

I asked my husband Jose, a native Nicaraguan, about the lack of shoes and he explained that most of the women were not used to playing with shoes on. He even explained that there are two types of shoes, one with metal spikes and one with rubber spikes. The spikes provide traction in the dirt and remarkable, so do toes. There was a point during one of the games where a woman actually kicked off her shoes after making a couple of errors and I must say, she played better defensively once she was only clad in her socks.

The players didn’t seem to care that the field was mainly dirt with small patches of grass, they played as if they were on a perfectly manicured playing field, sliding into bases, diving for and running after errant balls. And they played well.

There was some confusion during the game though. Sometimes it was hard to tell who belonged to which team, what the score was, which player was batting, what the count was, what inning it was or how many innings were going to be played, and even how the tournament was organized.. So much so that the end of the tournament saw everyone scratching their heads as to why Haulover won the championship, for the 17th year in a row, when Little Island was the only undefeated team. There was talk about A and B Groups and everyone needing to play everyone else and blah, blah, blah but at the end of the day I was disappointed with the results. Little Island should have taken home the championship trophy.

I also had the honour of watching the US Women’s College Softball tournament on television and couldn’t help but compare and contrast what I was seeing between the two events.  The US women were, as would be expected, very organized, professional and uniform. There was no guessing as everything was displayed on the television screen and the announcers filled in any delays in information.

The thing that was most remarkable to me was how much heart the women played with—during both tournaments. There was no giving up. They played the best they knew how to—right to the final out.