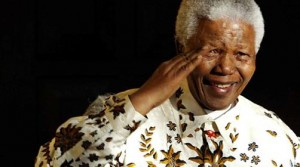 Nelson Mandela passed away on December 5, 2013 and I cried. It seems that ever since this gentle goliath entered the world’s stage, I have been watching and crying at his struggles and victories and cheering him on from in front of my television.

I never met the man but I have followed his life since his 28-year imprisonment first became news to the world. I, along with my then husband and children watched the newscasts as he was released from prison. I cried tears of joy at the thought that with his release the world suddenly became a better, more equitable place.

I cried again when he was elected to the post of South Africa’s Prime Minister despite or should I say in spite of his skin colour and the caste under which he was born.

I read his biography with a new box of tissue close at hand knowing that again my tears would flow for all that he had faced and had overcome.

His divorce from his second wife Winnie Mandela was a sad occasion though one I could understand given his rising political and worldwide fame and the scandals in which she seemed embroiled. His third marriage to Graca Machel made me shed tears of joy that he had again found love and a suitable companion.

And then I watched and waited for the inevitable as I received reports of his declining health in his advancing age. I wanted him to live forever. I wanted him to remain a symbol of hope for not just the citizens of South Africa but for all of mankind. But as great as he was, even he had to bid the world good-bye and enter that final eternal sleep. And I wept for him and for us.

Fortunately there are people that will continue the work that Madiba started. His legacy of peace, unity and equality will not die with him. It seems that there may still be hope that we humans will stop fighting against each other over skin colour, religion and other things that we can’t change about ourselves. Maybe one day there really will be peace on earth if we follow in the footsteps of this great man. And maybe now I can stop crying over our great loss. One day maybe.